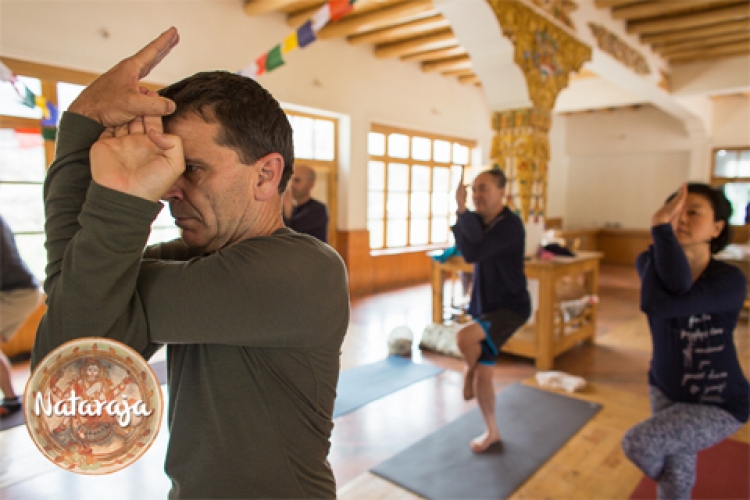 This is the story of how and why Garuda, the vehicle of Vishnu was born.

Prajapati Kashyapa undertook a sacrifice in order to have a son and it is said that he was helped by the rishis, the gods and the gandharvas. Kashyapa appointed Indra, the other gods and the valakhilya sages to bring firewood for the sacrifice. Because of his great strength, the lord Indra picked up firewood that was as large as a mountain and carried it without any efforts at all. on the way, he saw some rishis who were no larger than the joint of a thumb. Together they carried a single leaf of palasha tree. the ascetics were extremely weak from lack of food and their body were lean.

A cow's hoof had left a print on the road and this had filled p with water, causing them grief. Vain abous his valour, Indra was amazed at this sight and contemptuously laughing at them swiftly passed over them, stepping over their heads. At this they were angered and began a great act of sacrifice that bring danger to Indra. According to the rites, these great sages, rigid in their austerities, poured libations into the sacrificial fire and chanted mantras saying."The gods will have another Indra, capable of going anywhere at will and capable of summoning up any power at will. He will bring great fear to the present king of the gods. Through the furits of our austerities, there will be born one, swift as the mind, who will be a hundred times better than Indra in strength and valour."

At that time, the beautiful goddes Dakshayani Vinata desired to have a son. Having performed austerities and rites for the birth of a son and bathed, the pure one served her husband. Kashyapa told her, "O goddess! This act of yours will bear fruit and you will obtain what you desire. You will give birth to two valorous sons, lords of the three worlds. Owing to the austerities of the valakhilyas and through my own desire, these sons will be extremely fortunate and will be worshipped in the worlds." Kashyapa again told her, "Take good care when you bear these auspicious seeds in your womb. One of these will be a valorous bird, the Indra of all winged beings, capable of summoning every power at will and esteemed by the worlds."

Pleased, Kashyapa then spoke to Indra, "O Purandara (Indra)! You will have two powerful birds as brothers. They will cause no injury to you. O Indra! Stop worrying. You will continue to be Indra. But in your arrogance, never insult those who have knowledge of the brahman. Their words are liek poison, their anger is fearsome." At these words, Indra's fears were dispelled and he went ot his worlds.

Vinata was delighted, because her wishes had been fulfilled. She gave birth to two sons: Aruna and Garuda. Aruna with the malformed body, is the dawn and also the sun's charioteer. Garuda was instated as the Indra of the birds.